Waiver time? See the top available players in your league. Gain an Edge.

Still have questions? Contact us or check out the FAQs.

There’s no shortage of resources out there: Expert rankings, ADP data, podcasts, prospect breakdowns, etc., and many of them provide helpful insight to dynasty owners. But there are also areas in which they fall short. Expert rankings are great, but the experts aren’t the people you’re trading with or drafting against in your league (probably). ADP data is undeniably useful, but most startups and rookie drafts happen during a few month span, leaving you with old and outdated data during the rest of the year. On top of that, many of the most useful resources are either hidden behind a paywall, updated infrequently, or both.

KeepTradeCut exists to fill some of those gaps.

How Does That Work?

With the help of the dynasty community. KeepTradeCut is, at its core, a resource that’s both for dynasty players and by dynasty players. Our goal is simply to provide the platform, and to make it easy for you to contribute a little and gain access to a lot.

Ever played the game “Marry, F*ck, Kill”? If not, go ahead and Google it because we won’t elaborate further here. If so, however, you already understand 98% of what will be asked of you to gain access to KeepTradeCut’s rankings and other tools.

Knowing how the community values players is crucial in dynasty, and that’s the foundation of the rankings and other tools at KeepTradeCut. The most successful dynasty owners are the ones who know how they value players, know how the community values players, and make moves to capitalize on discrepancies between the two. KeepTradeCut helps you with both halves of building a dynasty.

There are a few other benefits as well. Because we don’t rely solely on ADP data, our rankings remain more up-to-date during months where there aren’t many drafts happening. Our “contribute to consume” model means that whenever there are dynasty players looking for up-to-date rankings, our rankings will be receiving new KTCs and therefore be more current than other resources. Because our product is the community’s consensus, there’s no reason to hide us from your leaguemates (really you should want them all contributing to the rankings). Since we rely on the community to feed our rankings and other tools, we would actually suffer from implementing any sort of paywall.

Essentially, we're here to provide as much help to dynasty players as possible. Got questions/comments/thoughts? Shoot us a message below. 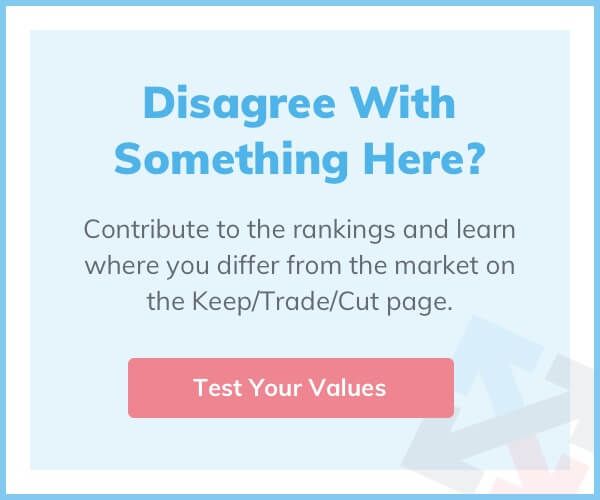